Did You Know You Live in an Invisible Box? 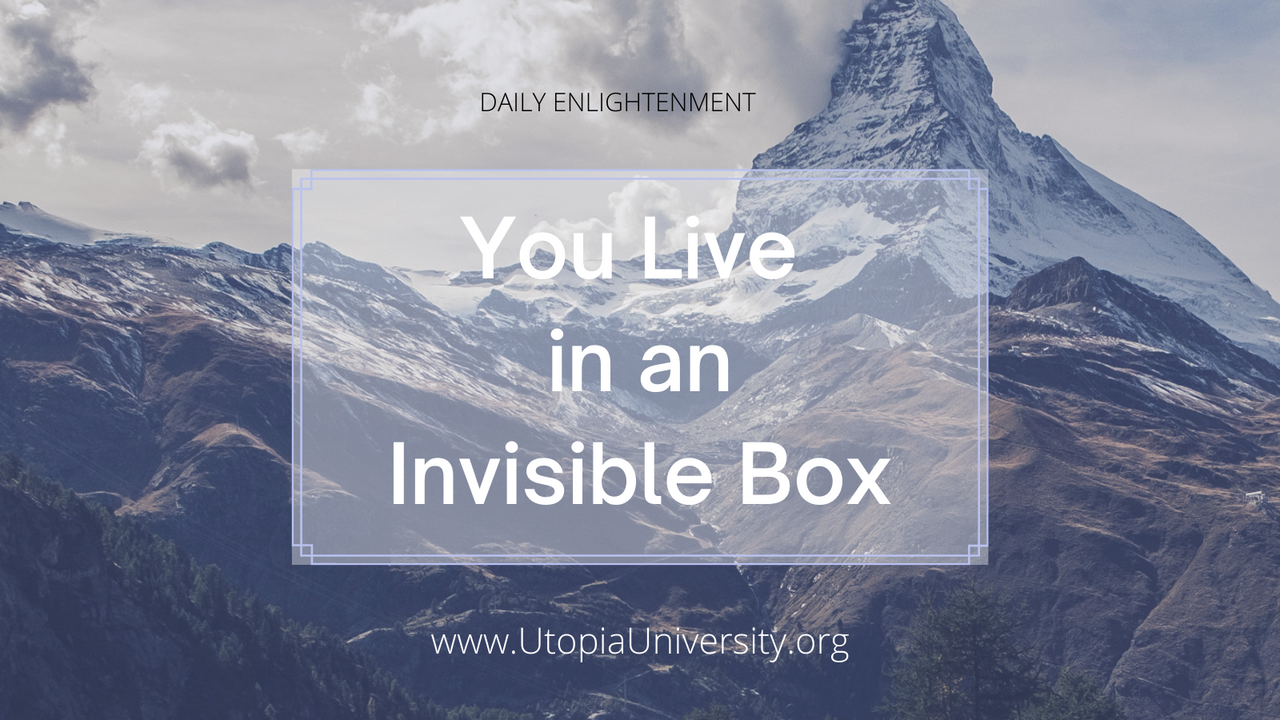 Utopia University
Did You Know You Live in an Invisible Box?
3:09

Did you know you live in an invisible box?

Did you know you live in an invisible box? Let me explain what I mean, and you may want to add this one to your favorites so you can remind yourself every day.

You can’t see it with your eyes, but you are actually surrounded and held in place by an ocean of vibrational energy. You slowly come to realize that you are surrounded by the invisible mantras, the invisible rules of society - they’re unwritten but they’re vibrating all around you – and they hold you in place.

Without being aware of it, you’ve internalized and accepted the mantras of your own family and your culture and the media and your government – these mantras are what hold the world together, they’re the authority for what is good and what’s bad, who’s important, who’s not important, what’s socially acceptable, what’s not acceptable, who has power and who doesn’t.

When someone dares to question a social norm…what happens? Everybody reacts because their long-standing vibrational pattern has been disrupted. They want to go back to the way it was, and so these invisible social rules carry through generation after generation.

But you’re not only limited by social vibrations, I want to be clear. You are also limited by your own subconscious vibrations which are very hard to change. Have you ever tried to change a habit? When you change a habit or routine, you’re disrupting old, comfortable patterns of vibration, so your Mind and your body fight against the change to get back to the acceptable, comfortable set of routines.

As long as this box remains invisible, as long as you don’t see it, then those vibrations – whether from outside society or from inside your own Subconscious Mind– those vibrations control you, like guardrails that hold you on a certain path – they prevent you from even wanting to explore other paths.

So how do you break out of the box? Well here’s what you need to understand.

If you change nothing, then these societal mantras, these subconscious mantras, will always hold power over you, they’ll always limit you. But you can intentionally create your own vibrations – the tool that we use at Utopia University is the Thought Matrix - and as you disrupt your internal vibrations, your external reality also becomes disrupted. These new vibrations disrupt the comfortable vibrations – and with enough consistency of practice, a new reality emerges with new beliefs, new habits and routines - healthier, happier, more abundant.

Break out of the box, disrupt outdated and limiting norms, create new and better habits – use the Thought Matrix to wake yourself up off of auto-pilot by creating new vibrations from within.

Get Our Monthly Newsletter

Enlightenment wisdom emailed straight into your Mind each month.

Get monthly updates, ancient wisdom, and access to the podcast discussion here.